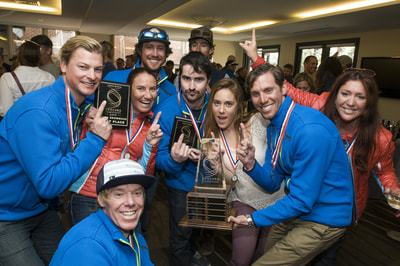 A special tribute and dedication for Jerry (Bergie) Berg was lead by the Aspen Divas as the finale of the competition where all teams
participated. Bergie was the founder and Coach of the original Diva Team.
His energy was clearly present in the number of competitors whose lives he touched.

There was talk of changing the format of the event for 2014 adding racing and moguls as well as modifying the School Figure.

This was the last year the event was only Synchro Skiing. Starting in 2014, we added Racing and Bumps.

After a few nail biting weeks wondering if the snow would last and having both Aspen and Snowmass on standby for a possible change of venue, the amazing grooming department at Aspen Mountain saved the day!!!! OUR eternal thanks to Peter King and Steve Sewell for being flexible and supportive during this uncertain time.

By all accounts, the best Aspen World Synchro Championships yet. The 10th annual proved to be the biggest, the highest level of
competition to date, a wonderful welcome back to the Germans and a warm welcome for the German Women's team, with a wonderful
and touching memorial tribute to Rob Mahan from the Beaver Creek Demo Team who won it for Rob.

New teams we welcomed this year were Synchro Ladies Germany, Team Beavo, Southern Synchro Skiers and the Loveland Demo
Team for their debut. Many members of these teams are no strangers to the sport and have been synchro competitors on other teams
over the years.

In an effort to ensure all teams were able to show their talent and perform all of their 4 passes they have trained months and months
perfecting before the weather denied them as it did last year, all 4 passes were run consecutively without break. This made everyone
happy especially Bonnie's restaurant when the party started on the deck early afternoon with DJ Ronnie. The winners were announced
on site and trophy and medal presentations were awarded at the Limelight apres party. Huge thanks to our Volunteers, especially Chief
of Course Dave Grogan, Ski and Snowboard Schools of Aspen for prize money, to Joey for supplying course decoration, to Patrol for
their support and excellent care, and to Gregor Neal and the judges.

The Aspen World Synchro Championships Perpetual Trophy was proudly presented for the first time with engravings of winners of the
Open division and Women's division for the past nine years since 2003. Beaver Creek Demo Team took the Open title and for Women,
Aspen Team Diva will be added for 2012!!!
The 2012 comp was dedicated in memory long time Synchro Skier Rob Mahan 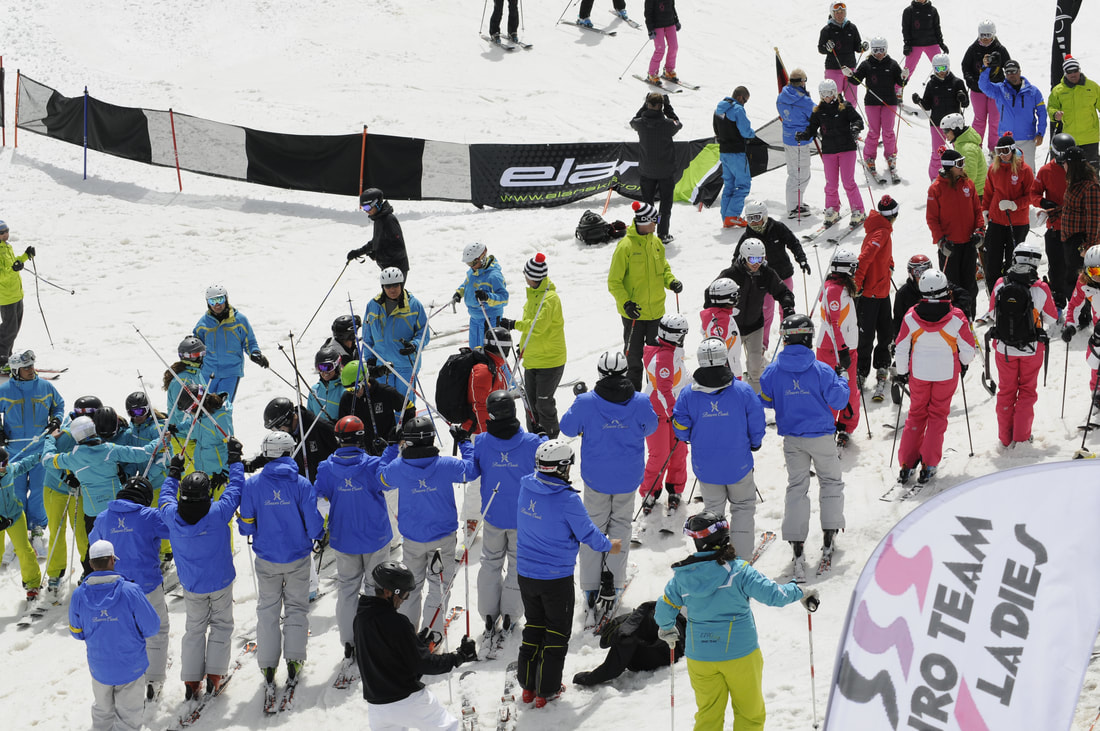 2006-2011 Medals & Trophies
Congratulations to all the teams for competing in challenging conditions. We had a raging snow storm which was dropping more than
an inch an hour with high winds and fog. You could barely see the finish line for about 3 hours while we hunkered down in Bonnies restaurant. We did manage to pull off two passes and the results are in. Thanks to all 2011 teams and Challenge Aspen for a show pass!!

First place is local in all categories, Open, Women, and Snowboard.

For first and second place teams, The Aspen Demo team won 2 of the 4 passes as did the Snowmass training Aspen TeamDiva. The difference was made with the other two passes, The Aspen Demo Team came second on both and the Divas only second on one.

Thanks to the Ski and Snowboard schools of Aspen/Snowmass for the generous donation of $1500 in prize money. Special thanks to all the spectators who cheered us on from the deck of Bonnie's.It was fantastic!!!

A special welcome to all of the Telluride teams and the first Snowboard teams we've seen since 2002. We are expecting at least 5 new teams in 2011!

First place is back in the Hands of the Beaver Creek Men. This should give their team some great momentum as they head off to the Swiss Snow Happening. We wish them the very best of luck.

The Divas are so proud of their second place finish. With a new record low attendance, the teams were very closely matched.
So much so that after 2 passes, it was a 3 way tie. The ranking was then determined by the mandatory school figure score.

Thanks to Slidemater, Plum TV, and The Aspen Times for great coverage and a special thanks to all the spectators who cheered
us on from the deck of Bonnie's. It was fantastic!!!
On behalf of the Divas, we give thanks to Peter King, Aspen Mountain grooming department,  Aspen Mountain patrol,
our DJ Ronnie, the judges, and especially Dave Grogan, Kathryn Rooney and all of the volunteers.

Germany won their first 1st place trophy after 10 years of attending this and the previous North American competition.

The spirit of attending teams for 2008 was fantastic!!!
On behalf of the Divas, Thanks for all those who attended.  We give thanks to Peter King, Bonnie's restaurant, Aspen Mountain grooming department,  Aspen Mountain patrol, our DJ Ronnie, the judges, and especially Dave Grogan, Kathryn Rooney and all of the volunteers.

Beaver Creek does it again. Congratulations on their 1st place finish!! Team Germany and the Aspen Divas tied for 2nd place.
According to the rules, the tie was broken for the top score in the mandatory School Figure and Germany takes it for 2nd place with Divas in 3rd.

Thanks to all the teams for their enthusiasm and energy.

A HUGE thanks to all of our volunteers for their dedication. Thanks to: the judges, Ronnie - our DJ., Phil, ski patrol, lifts, grooming, tickets, everybody!!!!

It was another weather day, but it wouldn't have been a synchro event without that. It's historic now. If you want it to snow at your resort, just plan a synchro event. Fog caused about an hour delay to start, but we managed to pull off all 4 Demos for each team and complete the event. The competition was open to all disciplines, alpine, snowboard, telemark, adaptive and combinations of any of these. We were really happy to see Vail enter a snowboard team this year after a long absence. Thanks for coming Vail Snowboard Team. We hope to see you next year as well!!! All other teams were Alpine.

Teams are comprised of eight members, as well as one alternate, who ski/ride together to create exciting ever-changing formations with technical precision and skill. The format was 4 passes in total, one as the mandatory school figure, two free passes and a fourth as another free pass with the elective use of a jump.

This year we were short on Teams and we really missed having Team Germany and Turkey here. Team Germany backed out because of injuries and Turkey withdrew at the last minute because of a bad snow year and lack of training. We look forward to having them back next and possibly Team Germany with TWO teams!!!!!! That left all of the the teams from Colorado this Year. Vail Ski Resorts had the best showing with 5 teams entered from Vail and Beaver Creek. A team from Copper came as well as the local team, ASPEN TEAM DIVA!!!!!

The women of Aspen Team Diva were very excited to act as hosts for the third Aspen Synchro Championships.
The event was a huge success!

There were 8 Alpine teams in total.  Most were from Colorado, however one team travelled all the way from Turkey to compete. Turkey was the first international team to attend our event as they were the first at the previous competition series. (Battle of the Ski Schools)
We hope this starts a trend towards more European teams attending the Aspen World Synchro Championships as we continue to grow.

The format was 4 passes in total, one was the mandatory school figure, two free passes and a fourth was another free pass with the elective use of a jump.

Awards ceremonies and prize giving were hosted at the happening Aspen apres ski spot of 39 Degrees, Sky Hotel. Later revelry continued at Club Chelsea, who rose to the occasion by opening their doors to the athletes and spectators. Our great thanks goes out to all venues, on mountain, apres and underground scenes.

A special thanks to all the teams, volunteers, judges, Aspen Ski Patrol, Rich Burkley and Steve Sewell from the Aspen Ski Company,
and especially Tony Fry, Freddy Ricard and our sponsors for helping us put on such a fun event for both the competitors and spectators!

In 2003, when the Diva's learned the 2003 Battle of the Ski Schools International competition in Vail had been cancelled, the team lobbied for the Aspen Synchro Championships on North American. Spectators were given one fantastic show including sounds from DJ Gustavo Alder from Argentina. Spectators and competitors alike enjoyed the music and ski entertainment on a bluebird day from the deck of Bonnies Restaurant, directly at the base of the competition hill.

Team Diva has enjoyed several years of competing with four Championship wins and numerous second place finishes in the women's category. It is our hope to keep this type of event alive and provide a venue for both North American and international teams to gather, party and compete.